Food, like the Earth, is something that we all have experience with, although some of us far less than ideal. Which is why it’s funny-sad that we need a whole day to be reminded of the food systems that play such a large role in our lives. Being that I care deeply about these systems and believe in strengthening their sustainability, I participated in the first ever Food Day on Monday, October 24. Similar to Earth Day’s mission to promote environmental sustainability, Food Day is a day to promote healthy, sustainable, affordable food for all. 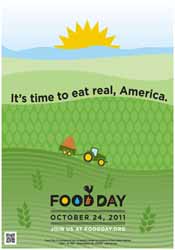 Even finding out about Food Day was a lovely surprise, being as my church had decided to do a Food Day event independent from my influence. My pastor saw the film Ingredients, heard about Food Day, and decided that holding a sustainable food event would be a good way for the church to serve the community. Of course, I agreed!

The event began with the aforementioned movie, Ingredients. Todd, my pastor, described it as “the opposite of Food Inc., in that it’s positive.” And he was right; although it brought up some of the biggest problems with the food system, most of it was very positive. It had a number of idealistic interviews with chefs and farmers who have bought into the local and organic ethos. They also showcased a breathtaking variety of glorious produce, which made me very hungry. For the most part, I like the positive approach. I think people need to know about the problems, but they’re also desperate for the solutions. Hearing about how bad everything is all of the time is exhausting, especially when you don’t have any alternatives presented. At least people have some options when they leave the theater.

Unfortunately, the movie did fall into one of the major traps of the local food movement – leaving out the “for all” part of the idea of “healthy, sustainable, food for all.” It was pretty darn privileged at times, assuming that everyone has the time and financial resources to eat and cook the way they do. I nearly gasped when one of the interviewees said in a self-righteous tone, “People need to take the time to make dinner. I don’t mind taking an hour or even 90 minutes to prepare a meal for my family. It’s worth it.” As if many of the people who don’t spend an hour cooking are doing so out of laziness! Many nights I can’t spend 90 minutes cooking, and I only have one job and am just responsible for feeding myself. I can’t imagine how hard it is for someone who has two jobs, is a single parent, or is taking care of an elderly parent.

Similarly, I was a little disappointed that they didn’t talk about any of the wonderful efforts taking place in our cities. Almost all of the farmers featured in the movie ran boutique small farms. I would have loved for the film to cover all of the new ways food is being grown, like Growing Power in Milwaukee, or in D.C., Common Good City Farm. Covering innovative ways to get fresh food to low-income people would have been great too – like how many farmers’ markets accept food stamps or how Mobile Markets bring produce to food deserts.

Thankfully, many of the follow-up speakers filled in that gap. One of the speakers was from Bethesda Cares, a support organization for Bethesda’s homeless residents. My church hosts their weekday lunch program two weeks out of the month, one of our favorite activities. (Three other churches from across the denominational spectrum meet the need the rest of the month.) It turns out that they have a significant amount of local support, including a partnership with one of the local farmers’ markets. When the market ends for the day, many of the farmers contribute extra produce, filling a gap that food drives never meet. They also said that they happily accept extra produce from gardeners. Although our garden has mostly ceased production, it’s a great option for next year if our tomatoes are nearly as abundant. It was encouraging to see how the community rallies around its most vulnerable members. But as Bethesda is one of the richest places in the country and still has homeless people, it also reminded me of how much more work these is to do.

Another great community project – one had I never heard of – was Graceful Growing Together, the outreach arm of Christ Evangelical Lutheran Church. They’ve recently opened a completely certified kitchen, a process that takes a long time, and they’re operating it as a true community resource. They’re offering professional training, including food safety and culinary principles, that qualify students to work in entry-level food service positions. The head instructor spoke about the program and his enthusiasm was clear in the fact that he wore his chef pants to the event. In addition, to meet the needs of families, they’re offering classes on basic nutrition, cooking with kids, and the role of the agricultural system. They’re even offering start-up businesses the opportunity to rent their kitchen – a resource that’s in great demand.

Other speakers included the organizer of the Bethesda Central Farm Market as well as a local chef who has recently started being more conscientious about his sourcing. I also got to meet Nick, of the infamous Save Nick’s Organic Farm Campaign. Although he wasn’t scheduled to speak, his supporters pulled him up to talk about the importance of the Farm Bill and the unsustainability of our crop subsidies.

And of course, I had the opportunity to speak about Ecolocity D.C.’s work. I promoted the DC Foodshed Map, described our work at the Bruce Monroe community garden, and our creation of an urban food forest. I didn’t get to practice much, so I was a bit nervous, but everyone loved our projects.

For its first time out, Food Day did pretty well. I look forward to the day when both Earth Day and Food Day are celebrated not because we need to educate people about the problems but because we want to share our wonderful successes.