In the last few months, I’ve made sure my kid-to-be is there for important moments in U.S. history even if he doesn’t remember them. First, it was President Obama’s second inauguration. Then, last weekend, it was Forward on Climate, the largest climate change rally in U.S. history. Admittedly, I attended both these events more for my edification than his. But I also attended because I truly believe that addressing climate change is essential to ensuring a sustainable future for my child.

The day was brisk with some serious wind gusts, reminding us once again that climate change doesn’t always equal warm weather. Despite his protestations, Chris and I walked to the Metro because I insisted, “You can’t drive to a climate rally. It would just be wrong.” As we walked to the National Mall, we saw fellow activists carrying hand-painted signs and even got a professionally printed one from some volunteers. 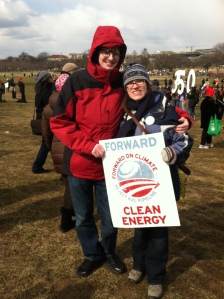 After meeting up with Steve, one of my friends from Ecolocity, we picked a spot near the Washington Monument that allowed us to see over most of the crowd. The multitude went on and on, with the event attracting more than 35,000 people and up to 50,000. Despite that, it still managed to look small, dwarfed by the massive National Mall.

Like the best protests, the crowd was equipped with a variety of creative costumes and signs. From more Earth flags than I’ve ever seen in one place to a protestor dressed as the Grim Reaper, people had some innovative ways of expressing their message. 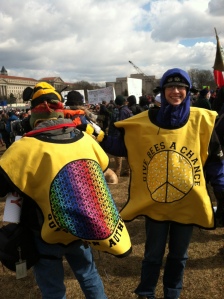 The event had a great array of speakers, representing the cultural and racial diversity of the best of the climate movement. The Rev. Lennox Yearwood from the Hip Hop Caucus launched the rally with a rousing cheer that the majority-white crowd admittedly had some trouble following. He also gave a powerful speech that drew parallels between the 1963 March on Washington that Rev. Martin Luther King Jr. led on the Mall and the one we were attending. “They marched for equality, but we marched for existence,” Yearwood said. I also liked his statement that “Organized money can never stand up to organized people.”

Later in the rally, Van Jones, founder of Green for All and Rebuild the Dream, drew another effective and somewhat shocking parallel. Referring to the Keystone XL oil pipeline that could run from Canada’s tar sands through the U.S., he said, “It would be like jabbing a dirty needle in the planet.” Chris leaned over to me and said, “Did Van Jones just compare Canada to a heroin addict?” I replied, “No – the U.S. is the drug user and Canada’s the dealer.” Which considering the social and economic damage of both isn’t all that far off.

The other particularly compelling speaker was Chief Jacqueline Thomas of the Saik’uz First Nation in British Columbia. She described about how greedy businesses had exploited her people and land for decades and how the Tar Sands are another incarnation of this abuse. Dressed in her ceremonial clothing, I found her accounts of her tribe’s work in modern environmental issues especially compelling.

I particularly appreciated these speakers because they provided the rally with a broader context. Environmentalism, especially climate change, is sometimes framed as a middle-class white issue of concern only to people who care about polar bears and don’t have to worry about their next meal. However, these speakers showed that climate change is fundamentally about injustices we carry out on people here and now, in our country and globally. They demonstrated that climate change is rooted in a broader picture of social and economic inequity that goes back generations.

On the opposite end of the spectrum, I also liked that the Sierra Club was a major organizer of the rally. Generally, most people think of the Sierra Club as fairly moderate. They’re the group you go with if you want to take your kids on a hike. So having them sponsor a very explicit political action and more importantly, participate in civil disobedience for the first time earlier that week, sends a very big political message. When I participated in the climate movement in the U.K., I saw their direct action worked because of their variety of protestors. For example, they involved the Royal Society for the Protection of Birds and had a number of elderly folks willing to lie down on the Heathrow Airport runaway in protest. Just like no one likes to see Grandma get arrested, I think the variety of speakers at this rally could be the turning point for the conversation on diversity and climate change.

Unfortunately, one of the speakers who contributed the most to organizing the rally was actually the least interesting. While Bill McKibbon, founder of 350.org, was pretty good as usual, I found his message the least unique. It didn’t really help that I’ve seen him speak a number of times, including at the end of the Climate Ride.

While the rest of the speakers were good, my attention started drifting after about 45 minutes. I was slightly distracted by the fact that I was really, really cold. We were supposed to start walking at 12:45, but people were still on stage at 1:15 PM. So as soon as we saw people start walking, Chris and I, along with Steve and his friends, headed for the street.

Fortunately, the march had a much different feel than the rally. From the banners to the chants, the march was completely about the crowd. The New York City / New Jersey contingent was particularly compelling, in shirts that said “Occupy Sandy.” An off-shoot of Occupy Wall Street that’s working to help the area recover from the hurricane, they sang about how “children of the Rockaways” are still going to bed without light and heat. While the speakers on stage had powerful stories, that plaintive song stuck with me more than anything else that day.

We circled the White House, then Chris and I ditched the rest of the group. A pregnant lady can only stand out in the cold for so long and I had reached my limit at two and a half hours. I was also really hungry – I had brought food, but was too cold to reach around in my bag to get it.

The rally and march reminded me of why I’m involved in the climate change movement. Most of all, it showed the diversity and power of the stories related to climate change from British Columbia to the Queens. The fact that my husband – who is not a protest-oriented or even left-learning individual – was willing to show up on the Mall with me in January speaks to the fact that climate change will truly affect our future child in tangible ways. Now, we just need to know how to continue this momentum.

7 Responses to Forward on Climate!