This is the second part of a two-part post talking about how Walt Disney World could help us build the Great Big Beautiful Tomorrow that Walt dreamed about all those years ago. Except the future I envision is not based on technology, although it includes it. It’s a future based on collaboration, hard work, and respect for each other and the ecological systems surrounding us. Or as I tend to summarize the philosophy of the Transition Towns movement, “It’s about learning to rely on ourselves and our neighbors for energy rather than fossil fuels.”

In the first part, I talked about how Disney’s ability to immerse visitors in even the most incredible worlds could help us envision this future. In this post, I’m going to talk about they could change individual rides to reflect this vision. Even though these changes are small, I believe that because of the number of people who visit Disney and its cultural significance, it could substantially contribute to a larger conversation. In this post, I’m focusing on Epcot because even though they don’t get everything right (especially on the side of cultural sensitivity), it’s definitely the most reality-based of the parks.

Spaceship Earth is the one thing everyone recognizes in Epcot, even if they’ve never ridden it – it’s inside the giant golf ball. Although it’s changed over time, it’s always been about the progress of humankind, focusing on communication in particular. As you sit in the “dark ride,” you watch animatronic people act out history starting with the discovery of fire, through the ancient Greeks, to Islamic scholars, the printing press, and the development of radio, film and television. These days, the scenes finish with an animatronic Steve Jobs tinkering in a garage. As the ride ends, you are invited to “create your own future” using a touchscreen on your capsule. You then make a series of choices, including whether you want to conserve natural resources or get the latest technology. It results in a very cute, funny little short: “Welcome to Your Future.” (Especially check out Chris watering the garden in his adorable little sweater!) After you step out, you can play a number of different games that illustrate future technology in the “Project Tomorrow” post-show.

I give Disney the most points for this ride in terms of envisioning an actual future. The Welcome to Your Future bit is funny and although the “green” option is over-the-top, it’s nice that they offer it. And I understand why it’s rather silly – having a Very Serious vision of the future looks dated very fast.

But honestly, I think they could go a lot further. Spaceship Earth is right at the main entrance to Epcot, and the introduction to the park for many visitors. By presenting a fun, interactive ride with a deeper message, it would set the entire tone for people’s experience. One way it could do this is to link the Welcome to Your Future bit more to real life. Keep the cute graphics – especially the bit with biking past the wind mills – but have someone live in a real-life net-zero house rather than a treehouse. Then, actually have the house on display! People line up for 20 minutes to see the Solar Decathlon houses in Washington D.C. – imagine the impact they could have in Disney. Within the animation, place those houses in cities based on New Urbanism principles, playing up the idea of bringing back Main Street, with its walkable downtown. Then, in the follow-on area, have photos and video of real cities carrying out those principles, similar to the excellent National Building Museum’s Green Community exhibit. In the email postcard you receive, they could include links to sites with information about renewable energy and energy efficiency like the Department of Energy’s EnergySavers site. They could also provide information on where people can buy these technologies – as Disney welcomes sponsors, I’m sure they could get some renewable energy companies to chip in.

I would even suggest changing the catchphrase to be more active and less passive. Perhaps instead of “Welcome to Your Future,” they could call it “The Future is Today.” Overall, the idea would be to get people excited about a sustainable future and motivate them to participate in building it.

The Land pavilion at Epcot is devoted to ecology, food, and pretty scenery. The two main attractions are Soarin’, a ride that allows you to “hang-glide” through scenes in California, and Living with the Land, a boat ride focused on agriculture. As Soarin’ is about as educational as watching a travel commercial, I think revising Living with the Land would be more productive.

The current version of Living with the Land is an interesting beast. After you climb in your boat, you wind through a representations of different ecological systems populated with animatronic farmers while an old-school narrator tells you about the diversity of agriculture around the world. It feels a bit like you’re in one of those old dioramas at the New York State Museum I loved as a kid. Proceeding into a room full of aquariums, the narrator sings the praises of fish farming. Continuing into a set of greenhouses, riders see all sorts of produce Disney is growing, including a trellised tomato “tree” not so different from the ones that took over my garden. Although the ride seemed to have a very heavy focus on aquaponics (growing without soil) the last time I was there, they seemed to have toned back their enthusiasm since then. Last time, they also showcased pumpkins being grown in the shape of Mickey, which were absent this time. As the ride makes its final turn, you view a laboratory where “Disney is working with the USDA” to develop new agricultural solutions.

Messaging-wise, the ride is a mixed bag. For aquaculture, they mentioned using the fish waste as a fertilizer for plants to create a self-sustaining system similar to that used at Growing Power in Milwaukee. But on the other hand, using aquaculture incorrectly, such as when it’s used for salmon in the Pacific Ocean or shrimp in the mangrove forests, can devastate local ecological systems. Similarly, the ride notes that “even backyard gardeners are doing their part” to increase produce yields, yet mostly offers technological and industrial solutions.

Of course, I would love to see Living with the Land be a showcase, living laboratory, and teaching tool for permaculture techniques. I would keep the dioramas – although they should be updated – but would revise the narration to talk about how by mimicking and complementing the ecological systems of a particular place, we can minimize our physical inputs and labor. Similarly, in the fish section, I would have ponds and lakes full of native Florida species (including alligators!) rather than sterile tanks. And lastly, in the greenhouse section, I would talk about building up the soil, and illustrate layer composting, food forests, and complementary planting. If they wanted to, they could even bring back the Mickey pumpkins – growing the fruit in a mold doesn’t mean you can’t raise the plants sustainably! Currently, the ride doesn’t have a Post-Show area, but I would certainly have one in my version. It would include interactive exhibits that allowed kids to dig in the dirt, adults to create garden designs, and everyone to bring home postcards describing how to compost and build rain barrels. 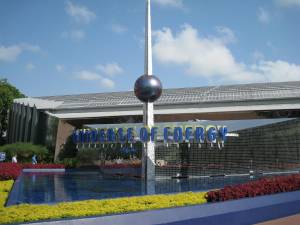 The Universe of Energy is probably THE ride that people think about when they think Epcot is boring. In fact, my dad actually fell asleep on it when I visited as a kid. This is mainly because the ride is 45 minutes long, a fact that they tell you several times as you’re waiting in case you have antsy adults or small children. In addition, the original ride was also one that took itself Very Seriously. In contrast, the current version of the ride that debuted in 1996 features Ellen Degeneres, Bill Nye, and a Jeopardy dream sequence with Albert Einstein. It’s not any shorter, but is definitely more entertaining. The only thing that they kept from the original were some animatronic dinosaurs, because who doesn’t like dinosaurs?

Unfortunately, while the “new” film is cute, the messaging desperately needs an update. Most of the ride is about the wonders of fossil fuels. While the large majority of what they say is technically not false, it’s what they leave out that’s problematic. They don’t mention any health-related problems with coal or oil and hand-wave climate change as “a hot topic.” On the other hand, they mention renewable source, but say they are “too expensive” and “have other issues.” I suspect that much of this messaging occurs because ExxonMobil was the sponsor of the ride until 2004. In addition, the energy landscape has changed drastically since 1996, with a much better understanding of climate change, a substantial rise in oil prices, and a much bigger need for energy independence now. Obviously, I would prefer the messaging to talk about the problems with fossil fuels and focus much more on what’s being done in renewables. Having information on both what is out there now and is coming in the future could be pretty neat. I would also make the ride much shorter, so it doesn’t scare away as many people. Unfortunately, I suspect that until they get a new sponsor, Disney isn’t going to bother redoing the film. If they did though, I’m sure Bill Nye wouldn’t mind – these days, he’s stuck trying to explain to purposefully ignorant Fox News anchors why climate change is a problem.

In addition to changes to specific rides, there are a few ways that I think Disney could illustrate sustainable living by introducing people to new concepts they might be skeptical of otherwise. My biggest one is having a bikesharing system with accompanying infrastructure across all of the parks and hotels. This would be useful for two main reasons: the parks themselves are huge and the parks and hotels can difficult to get between without a car. Of course, the bikes would have child seats and baskets, along with helmet rental. For the Magic Kingdom in particular, the bike set-up could quite simple – just establish a good, safe bicycle path paralleling the train that encircles the park. The more difficult part would be to build a bike infrastructure between the parks. However, because Disney has city-level government control over all of their land – a left-over from when Epcot was going to be a city – even that shouldn’t be too difficult. The second major change would be to source their food from local farmers as much as possible and prominently advertise that fact. Many people believe that local food is only for rich yuppies, and having Disney change their sources and then talk about them could go a long way towards changing people’s attitudes.

Knowing Disney’s sometimes-questionable environmental record, there’s a lot of things they could do to make themselves “greener.” But in my opinion, they could have the biggest impact by weaving stories of a sustainable future and inspiring appropriate action among the people who visit.