And for our next trick…

Derring-do runs in my family’s blood. My great-grandfather planned on cycling across the country in the early 1920s. He got very sick and had to abandon the idea in Ohio, but two of his companions made it to California, where they joined the circus. My grandmother once tried to jump off her roof with an umbrella to see if she could fly. My mom always wanted to join the circus as a kid and decided to bike 500 miles across New York for the hell of it. So perhaps the only surprise about me signing up for trapeze lessons was how long it took.

I’ve wanted to take a lesson at the D.C. outpost of the Trapeze School New York since I read about it in the Washington Post’s free commuter newspaper. After all, who hasn’t watched trapeze artists and thought, “That would be so cool”? Except perhaps Chris, because he didn’t seem very enthused when I suggested the idea. On the other hand, my mom was hesitant, but interested. When she reached her goal for getting in shape this summer, I was thrilled to make the trapeze class reservations her birthday present. When she told me a few weeks ago that she had done a massive zip-line in Quebec and turned upside-down on it (on purpose), I knew I had made the right decision.

Walking to the location, I didn’t know what to expect. As it turns out, they’re located in a giant tent that has some semi-permanent walls. Inside the tent was a sign-in desk, a large trapeze net with bars above, a few practice bars, mats, and an aerial hoop. It was as if a circus tent and a yoga studio had a high-flying baby that attracted rock-climber-types.

Although we were the only ones there at first, eight other classmates eventually showed up. Two of the classmates were around my age, with one at the intermediate level and one who had taken two previous classes. The other six were all part of the same family – a mom, two boys, and three girls. Their dad and grandmother were with them as well, but weren’t participating. The sight of this whole troupe wandering in made my heart sink. What if the kids were slow? What if they whined the whole time? Having promised to not complain, I kept my mouth shut.

Unsurprisingly, that was exactly the right move. Once we got through all of the safety protocols – which mainly involved putting on a waist harness tight enough to seriously constrict breathing – we were all enthusiastic to go.

But first, the instructor explained that we would be learning two major moves. The first was to grab onto the bar, swing out with your body in a “banana” shape (back arched, legs back), and swing your legs onto the bar. Then, hanging by your knees, you’d let go of the bar and swing out in a flying motion. The second move was to swing your legs back and forth a few times, giving you enough momentum to flip into the net for a dismount.

Ever the go-getter, Mom volunteered to be first. Thoroughly unafraid of heights, she marched up the ladder to the platform, clicked into the safety line, and grabbed hold of the bar, easy as pie.

Then she was off! It was amazing to watch her soar through the air – it’s not something you ever really expect. It was a bit of a struggle to get her knees locked in place, but she got to let her hands go and the look of sheer joy and fright combined was hilarious and awesome. You can tell people are simultaneously thinking, “Oh God, oh God” and “This is so cool!”

The other woman and two of her daughters were next. The woman, who was at least 15 years younger than my mom, was quite good. However, the three little girls, at ages 6, 7, and 8, were spectacular. (The third was actually after me.) You would have thought they were born into circus families. Of course, they probably have more recent practice than the adults. After all, in elementary school, I hung by my knees pretty much every day on the monkey bars!

Then it was my turn. I won’t deny it – I was nervous climbing those stairs. The ladder somehow felt much longer than it looked from the ground. I’m not afraid of heights, but looking down was still unnerving. The “hips out” launch position is inherently unnatural, because it puts your center of gravity off the platform, something your brain doesn’t like. Apparently my face reflected this discomfort, because I look absolutely terrified in my photos.

I finally grabbed the bar, heard the command – and hopped off the edge. The whole world rushing by as you literally fly through the air actually stops your breathing for a moment. I’ve done a lot of high ropes courses, but this was much faster and more dreamlike. The pounding adrenaline actually led to some sensory overload. Because it was difficult to process what was going on, I couldn’t hear the command for me to put my feet up on the first swing out. Fortunately, I got it on the second one. Then to let my hands go, just hanging by my knees – a whole new level of freedom, joy, and fear, all mixed up.

One more swing, and then it was letting go altogether, dropping into the net, and the safety of the ground. All of these intense emotions, wrapped up in only a few seconds. I both wanted to catch my breath for hours and walk right back up the ladder immediately.

But I had to wait my turn. The two boys, who were probably 10 and 12, were next. Unfortunately, they didn’t quite have the listening skills, flexibility, or timing of their sisters. They struggled with the moves throughout the class, partly because they kept mistakenly using their arms to pull up on the bar. Thankfully, both of them eventually nailed the dismount flip. And on the very last turn, one of them actually got his legs up and hands free! Even though I didn’t know this kid at all, I was so proud.

In fact, we all improved as we practiced a few more runs. Taking better advantage of the momentum helped me to swing my legs up faster and smooth out the dismount. Minimizing random flailing is never a bad thing. Similarly, Mom was able to speed everything up and look less awkward. Having specific actions to focus on helped me sort out the incoming sensory data; I could organize it better without removing the “Whooooo!” factor. 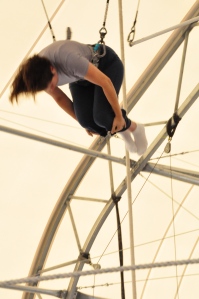 The only task that I didn’t accomplish was being smooth and quick enough to be caught by the trapeze instructor. In classic circus style, the harness-less instructor shimmied her way up an impressive rope to a trapeze high above us. During the turns of people who weren’t quite ready for catching, she would swing back and forth like a bored 5th grader. But when someone was ready, she’d swing really high, flip her legs around, extend her hands, and then just snatch them right off the bar. Even watching other people do it was magical. But my last turn was good enough that if I had one more try, I would have been able to be caught. And that was enough to please me.

Fortunately, I will get another chance. We enjoyed it so much that we signed up for a deal where we get a third class free if we take a second one. Their motto – “Forget fear, worry about the addiction” – is not to be taken lightly. Instead of fighting mall crowds on Thanksgiving weekend, Mom and I are likely to be high in the sky.

I’m incredibly glad that I did it and especially glad that I got to do it with my mom. From stories of her in Outward Bound to doing high ropes at Camp Chingachgook, she’s always inspired me to take physical and mental risks. It was really special to share the experience with her, and I look forward to doing it again soon. Perhaps now we can both join the circus when we finally grow up!

This entry was posted in family and tagged circus, DC, family, fun, trapeze. Bookmark the permalink.

6 Responses to And for our next trick…